Martial Artists - Are You Making This Mistake with Your Body Mechanics?

Martial artists with any experience at all believe they're generating a lot of power with their movements. In my first kung-fu class as a student--way back in September, 1973--we stood and punched, snapping our hips with the punch to add power to the technique.

As I've studied and taught the internal arts, I had to learn body mechanics that are very different from the other kung-fu, taekwondo, and boxing instruction I had received in the past. 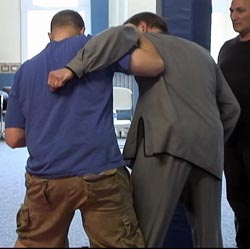 A little over a week ago, I held a workshop for all martial artists on the fighting applications of the Chen Tai Chi 38 form. Attendees included students and teachers from a wide variety of arts, from Shaolin and taekwondo to a Yang style teacher. There were white belt students and very high-ranking black belts.

And almost every one of them made one mistake. I knew they would, because everywhere I go--every martial artist I meet--makes this mistake.

Their movements are not connected from the ground through the body. 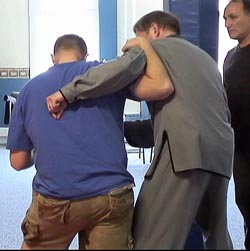 Here are some photos that illustrate--taken at the workshop. In the first one, I'm working with a student who has one arm around my shoulder, preparing to take me to the ground.

I tell him, "Okay, turn the waist and take me to the ground."

In the second photo, you can see that his waist has turned, but he hasn't connected it with his arm. The arm lags behind, and I'm not going anywhere. This is the mistake everyone makes when I put them in this position and tell them to take me down. If I tell them to turn the waist, the waist turns but the arm stays behind. 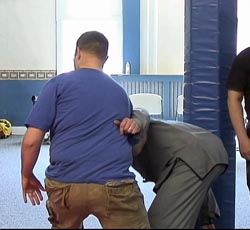 Remember, "when one part moves, all parts move." Power must be connected from the ground, through the legs, guided by the dan t'ien, through the hands.

In the third picture, he's more successful because I told him to connect the arm with the waist and turn it all together. Suddenly, he creates more power and finds it very easy to take me to the ground.

In Chen Tai Chi, there is a saying: "It has to be shown." There are concepts we read in ancient texts and in translated works, in magazines and books, and it's impossible to understand them properly until you are shown--in a physical way--what they mean. This is why so many martial artists interpret these concepts in mystical ways, and focus on "cultivating chi" and other nonsense (which should be a side benefit rather than the focus of the internal arts) rather than working on the physical skills they need to do the art properly.

The workshop was taped and will be part of the new Chen 38 DVD that will be released in early June. I like to work with real students on my DVDs to show mistakes they  make, corrections and coaching being made, so viewers can see the mistakes they're probably making. The video is already showing up as lessons on the online school for members to study.

Check yourself by doing the technique above. When you try to take your partner to the ground, turn everything together--arm, waist--and connect it to the ground through your rear foot. Let the strength flow through the body as you move. And stay relaxed.

I would tell you to include peng and silk-reeling, and close the kua, but again, those are concepts that have to be shown. If you don't know how to do those, there are DVDs available through this blog that can teach you.

The workshop was gratifying, and it was a lot of fun for me for two reasons -- I was able to show a mixed group of martial artists about the relaxed power of authentic Tai Chi, and I enjoyed seeing their eyes light up with the realization that "this really makes sense."

Great article! EVERYONE makes this mistake. The problem with teaching it is that people don't usually figure out what they're doing wrong until they feel it right once or twice. It's just getting them to feel it right.

Thanks, Taijiquan dude. I'm glad you visited the blog!