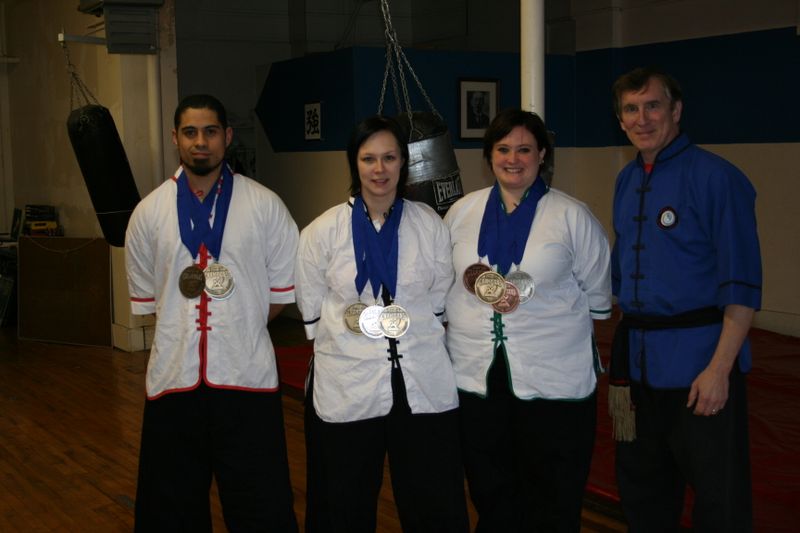 You know, sometimes a teacher is more proud when his students do well than he would be if he had done it himself.

Three of my hard-core students went to a big tournament in Chicago three days ago, on March 29--the 40th Annual AKA Grand Nationals/WSKF World Finals.They represented me very well. The tournament included internal arts competition, with Chinese judges who knew what they were looking for.

Kim Miller won silver in weapons, bronze in tai chi forms and bronze in internal. She also won a gold medal in northern forms with one of our tournament forms called "Mountain Storm."

I had planned on competing, but the recovery from pneumonia has sidelined me so far this year. But when you hear that the judges tell your students that their skills are higher than they should be, considering the time they've studied, it's a great feeling, and a great reflection on the dedication of these three. When Nancy and I moved to Florida in June, 2007, these guys showed their dedication. They organized practice sessions. Kim Kruse donated a building for practice. They kept it going until Nancy and I returned last October.

Congratulations, guys. All three of them are also preparing for their promotion tests this Saturday. Better be ready. :)

Wow, well done to your students, Ken. I know you are one proud papa. ;^)

A famous phrase in China is, "You only realize how valuable your treasure is when you see someone else holding it." Congrads to team and sifu!