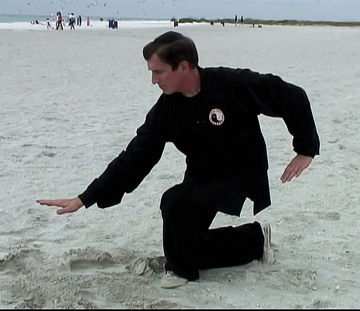 A new friend who bought a DVD over the weekend asked a very interesting question in an email.

Can you achieve enlightenment by practicing Hsing-I?

I love the question. On one hand, I believe that if you expect to achieve enlightenment by practicing any art, you're placing too high of an expectation on that art.

On the other hand, I believe enlightenment can come at any time -- usually not when you're looking for it.

I've achieve what I thought was enlightenment by doing chi kung, particularly standing stake or the little cycle breathing exercises, sitting in a chair. A couple of times, when I did standing stake outdoors, I started by working on my posture and then I put part of my mind on my dan t'ien, while another part focused on breathing. I imagined energy coming in with the breath and collecting in the dan t'ien. From there, I imagined the energy circulating through the body.

After several minutes of this, I let my mind go and I let the sounds of the wind and the birds surround me. I tried not to think, just feel, and become part of it all. Suddenly, I experienced a flash of insight that I can only call enlightenment, and I truly felt a deep truth--that I was part of everything around me, and everything in the universe.

This has happened to me more than once, and I cherish those moments. But once it happens, the mind becomes involved, and when you begin thinking about it, the feeling begins to slip away.

I believe it's really true that when you look for enlightenment, it becomes more elusive. It strikes when you aren't expecting it. Enlightenment also happens when you're doing things other than meditating. I've experienced unexpected flashes of insight at certain times in my life that completely shifted a paradigm and caused me to think differently.

Can you achieve enlightenment practicing Hsing-I, Tai Chi or Bagua?

Remember, these arts were not designed to serve as meditation. That's right, all you tai chi folks out there who believe that tai chi is "moving meditation." These arts are fighting arts, designed as martial arts. If you're looking for enlightenment, you may find it while practicing these arts, but the more you seek it, the less you're focusing on the intent of the movements, which involve body mechanics for generating power in self-defense situations.

Can you slow down the movements, let your mind go, and try to use it as meditation? Sure you  can. You can also do that with bowling or jogging or cycling or anything that requires movement.

There was a time that I practiced tai chi to become one with the Universe. I was good at the style of Tai Chi that I did and even won a national title at the AAU Championships in 1990. Seven or eight years later, I was introduced to Chen style, and I was stunned at the power, and the ability to break an opponent quickly and put them on the ground.

In one hour, I knew I had to start over because in thinking too much about the metaphysical, I had completely missed the reason tai chi exists -- as a self-defense art. My body mechanics were horrible -- in fact they didn't exist at that point. I had to start from scratch.

This doesn't mean that at some point, I'll be doing Laojia Yilu and won't have a flash of enlightenment. That could happen. But for now, when I practice, I focus on the long list of body mechanics that I'm trying to get right. The same is true when practicing any Hsing-I or Bagua form. Enlightenment is the last thing on my mind.

My recommendation for anyone is to search for enlightenment in meditation and in the little moments of life when enlightenment sneaks up on you and taps you on the shoulder. Just don't look too hard. And when you're practicing Hsing-I, Tai Chi or Bagua, search for the enlightenment that comes when you do the body mechanics properly in a movement and get that special feeling in your body--and the flash of a light bulb in your mind--that it feels just right.

I'm always troubled by the many, many people who think that they will achieve Nirvana, Satori, enlightenment or some other spiritual awakening through a martial art.

I always say that practicing a martial art is good for you, but if you're dealing with some philosophical quandary, you need to consult your priest, minister or rabbi, not your sifu.

Ahhh, Grasshopper, I might disagree with you there. I agree that the martial art isn't the answer, but the priest, minister and rabbi will tell you that you must depend upon a diety.

The sifu might tell you that the truth is within. From my perspective, that rings true. But that's just one man's perspective. As they say, whatever blows your skirt up. :)

Sean , I was one of those
who was taught/mislead by the
"enlightenment"of IMA.

Ken, thanks for clearing up
the misinformation. :)

I'm not trying to push religion. I just get annoyed by people who confuse their martial art with a religion.

Everyone needs somewhere to turn for guidance, even if it isn't to a religion. As someone who once considered himself a hardcore Atheist in his youth, I read writings by and about many of the great philosophers, like Hegel, Immanuel Kant, Tom Paine, Ben Franklin, Thomas Jefferson, Lao Tze, Chuang Tze, Thoreau, etc.

If you don't get guidance from a religious tradition, then by all means, I would look into works of some of those philosophers. There's great stuff there.

I just don't think the practice of a martial art is the solution to all one's ethical, spiritual, moral or philosophical issues. I would always recommend that someone with those issues consult someone who has made the study of how men should live their lives, whether a clergyman or even secular philosopher or ethicist.

But you're right - it doesn't excuse you from looking within as well once you have this new information. In the words of Buddha, "Believe nothing you hear, even if you hear it from me, until you have searched your own heart and found it to be true."

Nice postings, Sean and Ken! Thanks for the input!