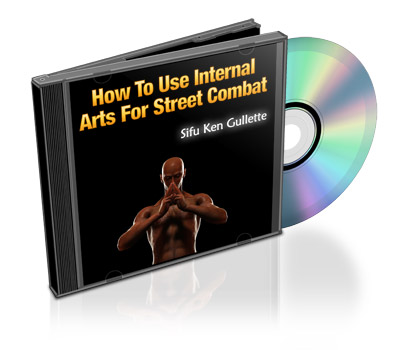 Charles Prosper, the editor of the book, Fighting Secrets of the Martial Arts Masters, interviewed me recently on the topic, "Using the Internal Arts for Street Combat." Okay, the title of the book makes me chuckle a little, I have to admit, but I'm happy to contribute to the image of the internal arts as strong fighting arts.

Charles is compiling a lot of interviews with different martial artists who contributed a chapter to his book.

Here's the audio file. You can Download Vol.1-InternalArtsStreetCombat-KGullette. You can listen or download it to your computer or iPod.

you're doing an excellent job at bringing across the internal arts as suitable for serious self defense. I very much appreciate your non-esoteric approach towards Taiji.

However, it seems to me that you're struggling with rational explanations for the role of meditiation and "centering" in fighting applications. I have found the book "Taijiquan: The art of nurturing, the science of power" by Yang Yang to be very helpful in this respect. He goes into the current state of scientific research on meditation, and presents a working model of what it does and how it helps you in a fight.

In essence, the explanation is this: meditiation is a technique to learn how to control and influence by will the autonomous nervous system. Staying calm and alert in a fighting situation is not how we're hard-wired. Calmness is connected to the parasympathetic nervous system, whereas the sympathetic nervous system is responsible for "flight-or-fight" situation, adrenaline and all. And for optimum fighting performance, you need a bit of both, and suppress a bit of both.

After reading Yang's book (he's a Chen stylist, despite the name) my impression is that Taiji isn't just body mechanics. It's body mechanics, plus body chemistry and body signal processing.

Andreas,
I haven't read Yang Yang's book but I will. I'd like to see what he's saying. I'm not sure that Tai Chi has any more impact on your body chemistry than any other exercise. I do believe that real meditation has an impact on the brain, however, but Tai Chi is NOT meditation in my opinion, and people who use it for meditation are missing the point of the movements.

Chi kung is better suited for meditation in my opinion. Through chi kung, you can probably change body chemistry in the way Yang Yang is talking about, calm your mind and body, and then attempt to recapture that feeling when in a violent situation. So I probably would agree in what you wrote to an extent. But chi kung is not self-defense, and unless you practice defending yourself against attacks many hundreds of times, no amount of meditation is going to help you in a real-life violent encounter.

I'll read his book to see if I'm understanding this correctly.

First a little disclaimer: I've only been doing Tai Chi for a year or two, so a lot of what I write is based on what I've read, not what I've experienced. However, I'm a healthy sceptic who doesn't believe in anything supernatural, and did a lot of reading, as I didn't want to end up learning Yellow Bamboo for a decade or something. :)

I completely agree with you that meditation is not the point of Tai Chi. Self defense is, and this is where the art is coming from. However, meditation is part of the curriculum, specifically in the Zhan Zhuang exercise. You're teaching this exercise in your online school, you're pointing out the centering and calmness of mind aspects of it, and you even mention the importance of calmness and centering in your interview above. It is my impression that meditation actually is part of your Tai Chi, even if you don't call it that way. And my point is that according to the book I've mentioned, there's some solid scientific theory on why that's good for fighting. I'm looking forward to your opinion after reading the book.

Regarding Chi Kung: I've forgotten where I read it (I should start keeping notes on this!), but some master, when asked about Tai Chi and Chi Kung, stated that Tai Chi is a complete system of Chi Kung in itself. Obviously, the reverse is not true, and I'm not too happy that my school next door seems to neglect self defense. They don't ignore it, it's just not too much of a focus, and I'm glad to have found your online school to balance that.

The question I'm currently pondering, by the way, is whether there's any scientific rationalization behind Qi. I know that's a hot topic, as Qi is quite the favourite of the esoteric airheads, but consider the following:

* The Taiji classics and masters agree is that all movement comes from muscles, and Qi drives the muscles

* The autonomous nervous system controls blood distribution via vasoconstriction and vasodilation. Main consumers are the gastro-intestinal system (a.k.a. the area known as Dantien) and the muscles

My idea about Tai Chi is that a lot of it is empiric: if it didn't work, you'd end up dead. Then, some rationalization was added to it as an afterthought, based on the ideas of Chinese medicine. My theory, which I have absolutely no proof for, is that there is some physiological basis to Qi flow that is neither magic nor in contradiction to modern science, and that waits to be discovered.

In the end though, even if this turns out to be true, all that moving Qi around really does is supporting the foundation of Tai Chi: body mechanics.

Excellent MP3 audio.I learned some points from it. Is there any video regarding this internal arts?

Why yes, there are HOURS of video instruction available on my online internal arts school at www.InternalFightingArts.com. You can even sign up for a free 5-part course to sample it. There are also DVDs available on this blog and on the website.