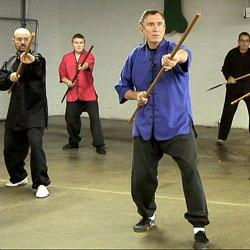 A group of students and I got together yesterday to work on the Hsing-I staff form. It's a form that is part of our Hsing-I curriculum.

I like the explosive nature of Hsing-I Chuan (also spelled xingyiquan) and this form embodies the qualities of the five fist postures--powerful techniques that drive through an opponent.

We worked on the movements of the form, including the body mechanics and dan t'ien rotation that is a vital part of any internal form. The dan t'ien moves with the staff just as it moves in an empty-hand form. The staff is an extension of your limbs. One of the challenges of Hsing-I students is to achieve relaxation in the movements, along with the explosive power during striking techniques.

After working on the form, we broke down each of the form's movements and practiced the fighting applications--blocks, deflecting techniques, sticking techniques, and strikes. I've known many martial artists who do brilliant staff forms but don't have experience with the fighting applications. I've always believed that if you're going to learn a weapons form, you should be able to actually fight with that weapon. And you should know what every movement means in a fighting situation. Otherwise, what's the point? This is a belief that was reinforced by one of my best teachers, Yiliquan Master Phillip Starr (I achieved a black sash in his system). He held weapons classes once or twice a week at his school in Omaha when I was a student back in the 1980s and early 90s, and I enjoyed working applications and sparring with the staff, sword, broadsword and spear.

It was a fun two hours yesterday, focusing on this one form and its applications. We videotaped the entire session for the online school and I began putting the instruction segments on yesterday afternoon.