A Good Day at an Illinois Martial Arts Tournament 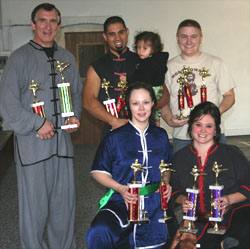 Four students and I attended a tournament in Moline, Illinois, yesterday, hosted by my friend John Morrow. I hadn't competed in over a year-and-a-half, and after two heart surgeries this summer, decided to just enter for forms and weapons and wait a little longer, maybe next spring, to enter sparring competition. Photo at left shows me, Chris Miller (standing), his daughter Roewyn, and Colin Frye. Kneeling are Kim Schaber and Kim Miller.

We had a good day. Chris Miller won first place in the brown belt empty-hand forms competition, second in sparring (he was a much better fighter but didn't get the calls), and third place in weapons. He ran a bagua form in empty-hand forms and ran the Chen straight sword in weapons.

Kim Schaber won 1st place in empty-hand forms and 1st place in weapons. She performed Hsing-I in both competitions.

It was fun returning to action, seeing old friends and meeting new ones. And it was a lot of fun demonstrating Cannonfist and bagua elk horn knives in front of an audience.

Way to go Ken! You give hope to me and a lot of other over-40 athletes.