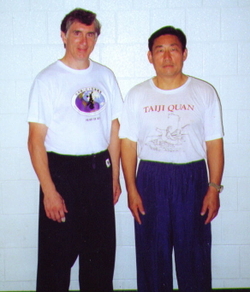 Each time I've had the pleasure of learning from a teacher or a tai chi master, I've taken notes. It's hard to retain everything, so I try to write as much after each session or day as possible. I've been sorting through papers and tossing stuff, and I ran across a lot of notes that I hadn't seen in a while.

One of my favorite memories of Grandmaster Chen Xiaowang was at a workshop near Washington, D.C. sponsored by C.P. Ong. Nancy and I flew to D.C. so I could study at the workshop. The participants were doing standing stake and CXW was going around the room correcting everyone. When he came up to me I had my eyes closed and he moved my hands in just a little. I smiled, opened my eyes, and he was smiling at me. He softly chuckled in a friendly way and went on to the next person.

CXW likes to compare tai chi to driving a car. He says if a wheel is broken you can't drive well. If your posture is broken, it's hard to do proper tai chi. That's why, when you begin learning Chen Tai Chi, you spend a LOT of time holding postures and getting hands-on corrections. Then you must learn the body mechanics for movement.

Without peng jin, you are not doing tai chi. If you're studying tai chi and your teacher hasn't instructed you in maintaining peng (and I'm not talking about the "ward off" posture) then you're doing movements that look like tai chi, but you're not really doing tai chi. Peng jin is the most important aspect of tai chi.

Grandmaster Chen says peng jin is "everything full, everything flowing, nothing broken." That's a lot easier said than done. That's why we do Laojia Yilu thousands of times.

During the next two or three days, I'm going to put more posts on from notes I've taken over the years after some great training sessions and classes.

It's a lot of fun to go over your old training notes.

I don't have much written down, but I put a lot of video. Whenever Tony Chan and I went to a seminar, he would take copious written notes of what was covered. As soon as we went on break or got home, we would videotape what we covered.

It's been fun lately transferring all that old stuff to DVD. It's like a K-Tel record.