New Book by One of My Teachers 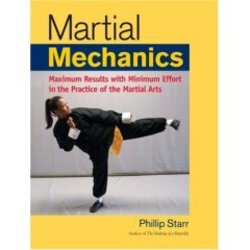 The man who introduced me to the internal arts, Sifu Phillip Starr, has a new book out called Martial Mechanics. I'm ordering a copy today.

Sifu Starr has devoted his life to the martial arts. I met him when I moved to Omaha in 1987 to take a job as news producer at the CBS TV affiliate. I was bummed out because I had just lost my job in Cincinnati and didn't really want to be in Omaha. "What the hell am I doing in this part of the country?" I wondered sadly.

Each time something bad has happened in my life, it has resulted in a change of direction that has turned out very positive. As my wife told me last night, "When one door closes, another one opens."

During my first couple of weeks in Omaha, I thumbed through the yellow pages and found Sifu Starr's school. I called and a young man named Chris Virant answered and was very friendly. I went in to try a class and the rest is history. It turned out that losing my job in Cincinnati, and bouncing back in Omaha, caused me to meet one of the most influential people in my life.

I can't wait to read his new book.

I've been editing the next DVD in the Hsing-I series -- "Fighting Applications of the Five Fist Postures." The photo at left is from the DVD.

It's a lot of fun to edit because it's a class situation where students are learning the fighting applications. So far the DVD is an hour long and I've only gotten through Pi Chuan and Tsuan Chuan. I might end up having to make it two discs.

I like to put a real class on video because if you're using it to practice, you can see beginners working on the movements and watch as I coach them through proper posture and body mechanics.

A couple of the best videos I ever saw were done by a Bruce Lee student, Larry Hartsell. He gave me the idea because he had someone videotape his seminars--he called them summer camps. It was raw video with crude editing, but I considered it one of the best couple of tapes I ever saw as he worked with students and coached them through movements.

My goal is to always give a lot of instruction for the money. I hope to have this done soon.

The best of the best -- Grandmaster Chen Xiaowang -- is returning to the U.S. for a tour this year. Here is the itinerary. Thanks to Jim and Angela Criscimagna of San Diego, disciples of Chen Xiaowang, for this itinerary.

We had a good showing at John Morrow's Spring Tune-Up Tournament in Moline, Illinois on Saturday. Students competed using Hsing-I and Chen Tai Chi forms in an open tournament.

Kim Schaber won 1st in forms and 1st in weapons. She also won 2nd in sparring.

Kim Miller won 1st in sparring and 1st in forms. She won 2nd in weapons.

Chris Miller won 1st in forms and 2nd in sparring.

Colin Frye won 2nd in forms, 3rd in weapons and 4th in sparring.

Steve Rogers won 2nd in weapons, 3rd in forms and 2nd in sparring.

Great job, everyone! Keep up the hard work!! I wish I had been there!