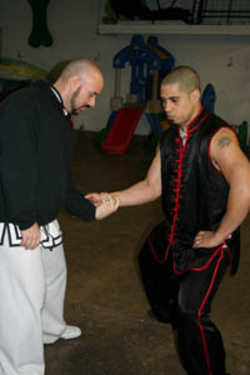 On  Sunday, Feb. 3, we trained for over 6 hours and it felt good. Students said they weren't quite as tired at the end of the day as they were after the Chen Xiaoxing weekend, so I'll have to push them a little harder next time. :)

We started with a couple of Tai Chi movements and silk-reeling, driving home again some of the body mechanics needed for performing the internal arts properly. Throughout the weekend, I showed how the same mechanics are used in Hsing-I (we didn't devote any time to bagua). The photo at left shows Rich Coulter (left) and Chris Miller working a chin-na application from "Lazy About Tying the Coat."

One of the biggest habits to overcome when training in these arts is the habit of striking by using arm and shoulder muscle rather than transmitting power through the body. The arm and shoulder muscles do very little of the work. And this was one of my goals for the weekend--drilling on whole-body movement and silk-reeling, where the power begins with the ground and flows, spiraling through the leg, directed by the dan tien and manifest in the hands (or whatever part of the body is striking). 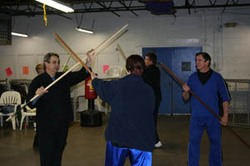 We did some push hands, focusing on spiraling and slowing it down to feel the body mechanics.

I opened it up for requests, and by popular demand we worked on staff fighting techniques and then sparred with staffs. My philosophy has always been that if you work on a form, whether empty-hand or weapons, you should be able to use it in a self-defense situation. So I teach fighting techniques for each weapon we practice. It was fun to practice some of the blocks and strikes and then put them into practice by sparring.

I watched the students doing different forms and then offered a critique, pointing out things to improve on. One of the tendencies is to rush some movements, particularly in Tai Chi. It takes so much patience to slow it down and really get satisfaction from doing a movement well. Too often bad habits develop and you don't realize that you're rushing a movement, cutting part of it off, and not realizing all the body mechanics involved.

We called it quits at around 4:30. The time went by too fast this weekend. It was wonderful seeing everyone and very generous of Kim Schaber to donate her facility for training. So if you're in the Quad Cities and need a place to keep your dog when you're out of town, call K-9 Child, at 3030 Hickory Grove Rd. in Davenport.

I think everyone has plenty to work on until I return, and in the meantime we'll exchange video clips privately on YouTube.

So is the Hsing-I Applications video still on schedule for release at the end of February?

Evan,
Give or take a week or so. :) I'm still trying to crank out the Internal Strength DVD. Work and life just gets in the way sometimes, doesn't it?