Home Archives Profile Subscribe
Cultivating Chi - What Does It Mean?
No Sweating in Tai Chi?

Finding the Heart of a Form 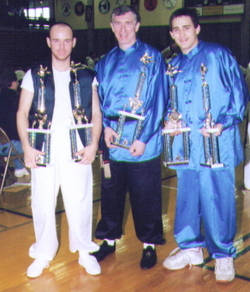 Many years ago, I received some excellent advice from a female karate black belt judge who consistently scored me very low in tournament competition, even when other judges scored me high. I usually performed Hsing-I forms in tournaments back then.
This went on for a couple of years. Then at one competition she scored me a full point below John Morrow. Now, as you can imagine, that was just outrageous. :))
So I approached her after the competition and said, "Critique my form."
She told me that I blew through it like a house on fire. There was no pacing, she said. I thanked her for the advice.
Naturally, at first I thought, "Oh, what does she know," and then as I thought about it for the next few minutes, I realized she was right on the money. When I watched the video of the performance, I knew exactly what she was saying.
I was performing the movements and trying to get through the form without giving the movements the full life that they deserved. I compared it to the advice I used to give young TV news anchors that I hired, when they read each story, whether it was a murder or a story about a squirrel on waterskis, all in the same tone of voice. I reminded them that they were communicators, and each story contained its own emotional tone. When they found that emotion and communicated it with their voice, they would be great news anchors.
The same is true with a form. I began studying each movement, looking for the internal power, the pauses, the subtle places where the pause would then turn into fa-jing. The movements became smoother, I was able to distinguish more easily between the soft and the hard, and the fa-jing became more noticeable. I began getting a lot more compliments from other black belts who watched from the sidelines.
My first place finishes increased dramatically.
My entire approach to Hsing-I changed with that advice. Many of us who find the internal arts after studying other arts bring a lot of baggage with us. We use too much muscle, too much tension, and too much speed at the wrong times. It took an observation from a karate black belt to make me realize this.
A form is a lot like a play -- an imaginary fight -- a demonstration of fighting techniques. You're the actor, and if you're playing the form with only one tone, you just aren't getting at the heart of it.