In Sparring, Misdirection is Key 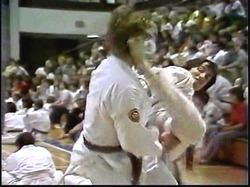 Yeah, that's me nailing this poor guy in the face with a hook kick. It was only 27 years ago at a tournament sponsored by my first teacher, Grandmaster Sin The. I still use the hook kick in tournaments, even at my advanced age, because as one judge laughed a couple of years ago after I nailed a guy with it -- "that's sneaky."

As anyone who has purchased my sparring DVD knows, I believe in being a well-rounded fighter, using both hands and feet. I can score with either, and I use both to misdirect my opponent.

Whether in tournaments or in a self-defense situation, you should try to put your opponent at a disadvantage by making him think you're going somewhere you aren't. In the photo above, I had only been kicking at waist level. I'd thrown several side kicks at this guy and he had blocked them. He was very good at the reverse punch and had already scored.

But he was holding his hands down and leaving his head open. It happens all the time. So, as he expected another side kick, I waited for him to rush me. The split second that he began coming toward me, I threw the hook kick. He was thinking waist-high, but the kick sailed over his hands.

That slapping sound is a beautiful thing.

Everyone has a different style. Some people like to charge in, throwing combinations until something lands. I've always preferred to size up weaknesses and use misdirection to fake out my opponents.

Sometimes I misdirect with the hands, faking a punch to the stomach and going to the head. Sometimes I fake a jab at the head and deliver a roundhouse kick to the stomach. It has to be done just right -- the timing is crucial.

One thing beginners should notice in the photo above -- I didn't take my eyes off my target. You need to keep your eyes open and watch your opponent all the way through your techniques.