The Heart of Our School 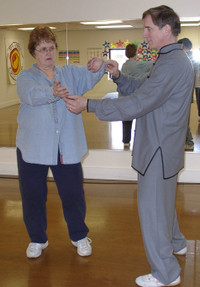 As our school comes to a close with final classes this Saturday, I'm honoring some of the people who have helped me during the past 10 years of teaching.

Marilyn "Skip" Hackett joined our tai chi class shortly after I began teaching in Bettendorf in 1999 (I began teaching in Muscatine in 1997). She loved tai chi so much that she added the kung fu class to her schedule, even though she was nearly 60 and had never done martial arts before.

Skip quickly became the mother hen of our school, recruiting many new students from her vast number of friends around Bettendorf. She became a publicist, mentioning the classes many times in her Pet Peeves column in the newspaper 50+ Lifestyles. She talked the publisher into giving me a column to discuss philosophy. She was a tireless promoter of the school, and kept student names, phone numbers, and email addresses organized for her dis-organized teacher. She bailed me out many times when I needed to contact students.

Skip became much more than a student. She became a good friend, and saw me through the darkest period of my life--a 20-month period after my marriage fell apart in 2001 (before I met Nancy). I struggled to recover and deal with it, and as I was trying to get through it, I suffered a serious shoulder injury that led to surgery and a long, painful recovery. I dang near lost the will to live, and shut the school down for six months. When I reopened, Skip was right there, attending every class, recruiting new people, and helping the new students.

Young people who joined the school accepted Skip and came to love and respect her. She was an inspiration to them all, and took everyone who walked through the door under her wing. She sometimes helped students with entry fees for tournaments if they couldn't afford it, and I think she even helped them with their monthly class fee, but she did it quietly.

Along the way, Skip learned tai chi and kung fu. She competed in tournaments. At her age, the media turned out to cover her first sparring competition. How could they resist a kung fu fighting grandma?  She even went with us to a huge tournament in Chicago and brought back a 6-foot tall 1st place trophy. What an amazing achievement for a 60-year old!!!

Just as she had been there for me, the school was there for her during the illness and death of her beloved husband, Charlie. Her knee and hip replacement surgeries have taken her out of action in recent months, but her presence is still felt in each class.

The school wouldn't have lasted this long without her. I'm very glad to have this opportunity to tell the world, and to say "Thanks, Skip," for what you've given me personally and as a martial artist.

Nice article on the blog about Skp. Do you know what true character is? True character is when you go and do something to help someone else and don’t mention anything about it to that person. It’s not, “Hey, I fixed your light bulb for ya!” It’s unspoken with kindness. For example, a son might see that a light bulb in his mother’s house is out and replace it and never mention it to his mom.

We are family! - Rich