Baby Steps are the Key to the Internal Arts 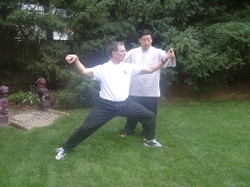 The past 10 years have brought changes that I didn't imagine when I began teaching in 1997. I worked for a long time in TV news and moved a lot. In the 90's I settled in the Quad Cities and in 1997 decided to start teaching. Little did I realize what would happen when I did. Basically, I realized that something was missing from my Hsing-I, Yang Tai Chi, and Bagua. I began reading a listserve--the Neijia List--on the Internet, and I read discussions by people like Mike Sigman, using terms I hadn't heard before such as peng jin and ground path. I asked if there was someone in my area that could show me what it meant. I was guided to Jim and Angela Criscimagna, in Rockford, Illinois.

After meeting Jim, I realized within an hour that I had to start over. Chen tai chi was so different, and the body mechanics were so much better than what I had been doing, my martial arts changed direction instantly. I explained to my students that our arts weren't complete, and they followed me as I grew, learned, and brought home new concepts and a new art--Chen tai chi. Before long, I tossed Yang tai chi aside forever.

Jim and Angela introduced me to the Chen family, notably their teacher, Grandmaster Chen Xiaowang. They are both indoor disciples now.

The photo above was taken in their backyard, during a visit to Rockford by Grandmaster Chen. Like a few other students, I paid an extra fee for a one-hour private lesson, apart from the 2-day seminar he was holding, which I also attended.

It's a valuable opportunity to have one-on-one coaching from the direct descendant of tai chi's creator. During most of the hour, he corrected my posture in standing and in the first few movements of Laojia Yilu. Each time I thought I had a posture correct, he would make another correction and it would feel completely different. When he truly gets you into the right posture, you usually can't hold it for very long. We Americans don't have time to spend getting our legs as strong as they need to be to really do it well for long periods. It's the price we pay for our lifestyles.

Even though I learned a lot attending seminars over the years by Chen Xiaowang, Ren Guangyi, Chen Bing, and Chen Xiaoxing (who I also had private lessons with and hosted him for a week in my home), my best training and most valuable lessons came from my American teachers such as Jim and Angela. Americans have questioning minds, and they probe deeply into the meaning of the movements and the proper body mechanics. Because of this, and because they were able and willing to explain things in plain English, I could learn more in an hour from folks like Jim and Angela than I could in several seminars by a Chinese master.

I've also tried to do that with my students. I question and probe and explore the movements, and I explain as deeply as I can. We experiment to see what works and what doesn't. As the years have passed, and I've begun to understand the concepts of internal strength and body mechanics, I've realized that all it now takes is many more years of study and practice to get better.

Taoism teaches us that nothing is certain but change. Everything is constantly changing and moving. When it comes to life, careers, and martial arts, persistence is crucial, and an ability to adapt to new information. One of the reasons my career has been successful is because of my desire to get better and improve my skills every day. Success in the martial arts is no different. Little by little, baby-step by baby-step, we improve.

Ken,
Thanks for the kind words. Good luck to you and Nancy in your new location. I wish you both all the best,
Jim