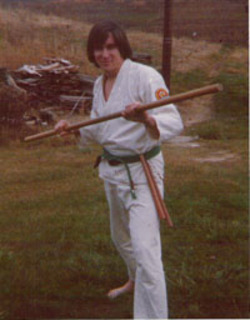 This picture was taken in 1974, when I had earned my green belt from Grandmaster Sin The in Shaolin kung fu. I'm holding the "Staff of Death," which I and my students still use in our school. This staff has made dozens of moves with me--it has traveled with me to homes in Kentucky, Ohio, Nebraska, Iowa, Illinois, and soon--Florida.

Our school is closing at the end of May. I'm taking a position as director of media relations at a major university in Florida. I'll be the university spokesperson and I'll work to get publicity for them, as I have done for ACT--the company that produces the college admissions exam--for the past 8 years.

It's a little strange to look at this picture, this 21-year old kid 33 years ago, and think of the journeys I've taken through the martial arts and through life. Even though it's 33 years later, I feel as if I've only scratched the surface of martial arts. There is so much more to learn.

When I take the Staff of Death to Florida, I'm excited at the prospect of being able to train outdoors year-round. I don't plan to ever teach regularly scheduled classes as I have the past 10 years. Instead, I might recruit one or two college students and teach them as I work to improve my own skills. I want to explore Chen tai chi much deeper. Instead of spending so much time teaching, I'll use some of that time to study the movements, body mechanics and fighting applications in-depth. I'll continue the website, the blog, and I'll continue writing and making instructional videos.

At the heart of Taoism is the simple thought that everything changes. But that doesn't always make change easier to handle. Leaving the Quad Cities is something I didn't expect to do when we bought our building. I'm going through major guilt over leaving my students. But I haven't always lived in the same town or state as my teacher, but I made it work.

After the move, I'm toying with the idea of giving up bagua completely. Years ago, one of my teachers--Jim Criscimagna--urged me to give up the extra arts and focus on Chen tai chi. I wasn't ready to hear it at the time. Now it makes perfect sense. The more arts you study and practice, the less quality you can expect to have in each one. It's really true. I think I'd rather try to be much better in tai chi than mediocre in 3 arts. For now, I plan to continue practicing Hsing-I because I'm pretty good at it, but my main love is Chen tai chi, and over time, I might phase out of Hsing-I.

There are literally hundreds of fighting applications inside of the Laojia Yilu form alone--punches, elbows, knee strikes, kicks, chin-na, throws and takedowns, and much more. I want to explore every one of them. If you have such a complete fighting system right in front of you, why not really dive into it, instead of dividing up your mental energy into several arts? Let's face it, in our crazy modern lives, we don't even have time to master one art, let alone three.

I hope you stay with me, and continue reading the blog, as we explore all this together.

Congratulations to you! It sounds like a wonderful opportunity for you. I do hope you continue teaching in some form or fashion. There are so few people out there who really have in-depth knowledge of Taiji as a martial art... much less Chen Taiji.

I wonder how this move will affect your training. Do you know of any good Chen stylists in Florida, or will you have to do a lot of traveling to get your instruction from Chen Xiao Wang or Ren Guangyi?

You mentioned the Laojia Yilu in your post. I may be getting the YMAA DVD of that form as demonstrated by Ren Guangyi. I'm looking forward to checking out the form!

Oh... I'm still waiting for that Xingyi video of yours to be released! :)

Adam used the analogy of trying to climb three mountains at the same time, a very difficult task, if not impossible.

He also said, one's perspective changes as you climb the various martial internal arts mountains (Hsing I, Taijiquan, or Bagua). He said, the higher you go, the view changes rather dramatically. Okay, I thought at the time.

After a number of years, I began to understand his statement and stopped the Shaolin and other arts I was practicing and focused on Chen Taijiquan. I haven't looked back and believe I made the correct decision, at least for my practice.

Good luck in Florida. It is sort of funny that you and I both are leaving the area for warmer climates. A good thing, though! I too, look forward to practicing outside year round. And like you, I won't be teaching public classes again. Having not taught public classes for the past few years, I must say, I have enjoyed not having the responsibility and obligation. Spending time practicing for the sake of practicing has been very enjoyable.

Good luck and do keep in touch.

Evan,
The Hsing-I video is coming, I swear!! It's been a little busy lately but I'm almost halfway through the editing process.

Jim, I enjoyed the mountain climbing analogy. The perspective really does change with time. Owning a school taught me that it wasn't really what I wanted to do. As a martial artist, I need to work with a small group that can work hard and develop skills. That's what I intend to do.

One thing I will miss about teaching like I have is the friendships Nancy and I have developed. People come into the class and over time, they become like family. Most of them, anyway. There are still a few who believe they should be taught for free--that your experience and time are cheap commodities--and those people make it a frustrating experience. They wouldn't treat a golf pro that way, or a tennis pro, or a basketball coach. But this is the subject of another post to come. :))