Interesting story here about an ultimate fighter who is sort of putting down arts such as kung fu.

I've studied martial arts since 1973 and in all that time, I haven't been in a fight. My last fight was as a junior in high school. As far as I'm concerned, I hope I'm never in another one.

In this article, it's implied that kung fu isn't effective because in a real fight, a "grandmaster" kicked a guy in the groin and bashed his head on the bar to end the fight rather than rely on the more elaborate techniques he had spent decades practicing.

In the current steroid and testosterone-driven view of martial arts that's a side effect of the ultimate fighting craze, we lose sight of some important principles.

For one thing, these are "arts." When you're young, you very often start learning a martial art so you can fight. As you grow older and wiser, your practice evolves into something different--fitness, spirituality, personal discipline, philosophy, mastery of self.

Sun Tzu wrote that the best fighter avoids a fight. It doesn't get any better than that.

Some of the best techniques are the simplest. If a kick to the groin will end a fight, it's much better than breaking someone's arm or neck, or putting them in a wheelchair, which the ultimate fighter in the article seems to think the bottle-wielding attacker belongs.

There's another important reason not to injure someone critically in something as stupid as a bar fight: the risk of a lawsuit. Injure someone critically in this day and age, and the guy you beat up could end up with all your money. This isn't the Wild West, and it isn't ancient China, where martial artists fought and the only thing to lose was your dignity and reputation (or your life). Here, you can lose your job, you can go to jail, you can lose your home and your bank account.

If you're willing to put all that on the line just to prove you can break a guy's elbow with a joint lock, go ahead, my friend.

One of my 15-year old students used kung fu against an attacker--a drunk adult who grabbed him by the collar and raised his other fist to punch. Before he could punch, my young student did a chin-na technique that we practiced in class and shattered the adult's elbow. The attacker spent a few days in the hospital, underwent surgery, and had a long recovery.

Maybe the ultimate fighter would have been happier if the kung fu "grandmaster" had caused the attacker in the bar to spend time in the hospital in surgery. It takes a lot of internal anger to think that way. Anger shouldn't even be part of the equation in a fight. But then again, ultimate fighters have never been accused of being philosophers.

There are many reasons to study and practice martial arts that have nothing to do with fighting and hurting someone. Too often, young guys full of "piss and vinegar," as the story says, don't have the insight, life experience, and the wisdom that comes with age to realize this. And so they put other arts down.

I respect ultimate fighting and the guys who pursue that sport. My kung fu school is right down the street, just a few blocks from one of the best ultimate fighters in the business -- Pat Miletich. I always cheer his guys on, because I think it's really cool that such a great teacher is in our town. He's very successful, and I think that's fantastic.

Good fighters in any art are good fighters. But even an ultimate fighting match isn't "real" fighting. It's really cool, and it's mesmerizing to see two guys go at it, and the training you go through is brutal, but there are still rules.

If I was 20 again, I'd probably study ultimate fighting with Pat. For a while. Until I began missing too many practices because of the injuries. At my age (I'll be 54 in a couple of months) it would be silly to engage in something that would have me limping into work. You just don't see many ultimate fighters in their 50's.

Ultimate fighting is a young man's sport for several reasons. Your body takes so much punishment at a young age, it takes a heavy toll. Your joints can't take the punishment as you get older. You heal more slowly as you get older. And as you get older, you understand that the testosterone rush that causes you to do so many stupid things when you're young, also leads you to believe that extreme force and violence are the best ways to deal with a physical confrontation.

The kung fu grandmaster in the news story probably understood this, and that's why both he and his attacker survived the encounter without an injury more serious than a "simple" kick to the groin. 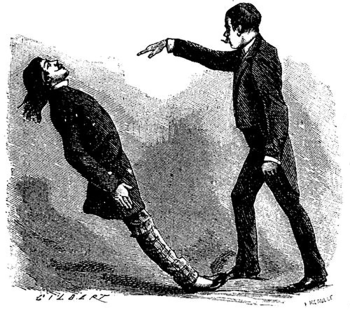 Tai Chi is NOT hocus pocus.

Here's an excerpt from a newspaper article about a Tai Chi teacher. I'm sure this teacher is a nice person, and her classes are probably doing people some good from an exercise and calming perspective. But this part of the story surprised me (well, not really). I removed the name of the teacher because this post is aimed at making a point about Tai Chi, not an individual.

Here is a clip from the newspaper story about the Tai Chi teacher:

According to those who practice the exercise, someone has, receives and releases energy that is either positive or negative.

“In Austin, we had a young lady who was going for the high jump in the Olympics,” (the teacher) said. “The master had the young lady’s picture in the envelope, put it into a circle and did some forms sending positive energy her way. She didn’t win a medal, but she did go to the Olympics.”

Positive thinking is a wonderful thing. But this type of practice has nothing to do with Tai Chi. In telling this type of story, we place ourselves in the company of those who believe in things like witchcraft. It implies that if the "master" hadn't done the forms around the photo, the young woman wouldn't have gone to the Olympics.

Tai Chi is not mystical, and if anyone attends a class where the instructor talks this way, please be aware that you're probably not really learning Tai Chi. The instructor might have good intentions, and might be a great and caring person, but there is absolutely no scientific validity to statements like this. I wish more people in the Tai Chi community, especially the martial artists, would become a little more vocal about things like this. We don't have to be mean about it, but as long as we perpetuate the mystical, we're going to continue to keep a large segment of the American public away from our art.

If you would like to learn real Tai Chi, Xingyi and Bagua -- the internal arts of Chinese kung-fu -- without the mystical mumbo-jumbo, go to my membership site and try two weeks absolutely free. More than 850 video lessons and downloadable eBooks and pdf documents teaching skills from basic to advanced. Go to www.internalfightingarts.com.

What Do They Mean By "Energies?" 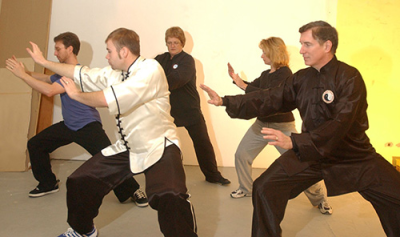 You read and hear about different types of "energies" or "jin" in the internal arts. I read an interesting interpretation of this the other day. Something was apparently lost in the translation from Mandarin. When we talk about energies such as peng energy, we aren't talking about a "real" energy circulating through the body.

Instead, it's a cultivated energy or skill. I like to think of a baseball player who has spent many years practicing. He can swing a bat and hit a baseball out of the park, while I'd be lucky to even connect enough to hit a foul. His use of the bat represents a particular strength, or energy. Another example could be that of a carpenter. He can drive a nail with expertise, while I might hit my thumb with the hammer.

Americans, however, don't refer to the baseball player as having great "bat jin," or the carpenter as having great "hammer jin." It isn't part of our culture. When the heavyweight champion of the world knocks out an opponent, we don't say he has tremendous "punch jin." We recognize, however, that each of these people demonstrate great skill and strength in their own way.

So the various "energies" of tai chi, such as peng, liu, an, gi, tsai, etc. are "methods" of dealing with an opponent's force. A baseball player does not use the same "energy" to swing a bat that he uses to catch a ground ball. He uses different methods of generating power, different body mechanics, for each particular challenge he faces in a game.

Players who have practiced a lot and have developed their skills make it look easy, just like talented martial artists do.

Cultivating the skills of the internal arts takes a lot of time and a lot of practice. You can't become a major league ballplayer after playing for three or four years. You also can't expect to develop great Tai Chi, Xingyi or Bagua skill by practicing a few years.

Don't miss my book on Internal Body Mechanics for Tai Chi, Bagua and Xingyi -- it will explain a lot and it is available on Amazon and on this blog for U.S. customers. International customers outside of the U.S. should use Amazon or you can order it through bookstores. 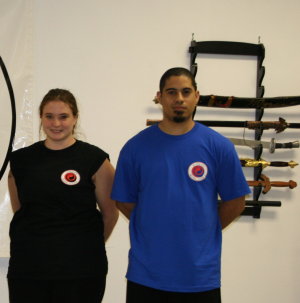 Only two of our students competed at John Morrow's tournament in Moline last Saturday, Oct. 28.

Chris and Kim joined in late January, and they've attended the majority of classes since that time. Their progress has been amazing, and these two folks are the kind of people that make a guy like me enjoy teaching. They practice outside of class, they're eager to present a good image of our school in public, and they are funny and have a good time in class.

So, congratulations! I didn't make this tournament because I was working on a new business, but hopefully next year, I'll be at all of them with you.